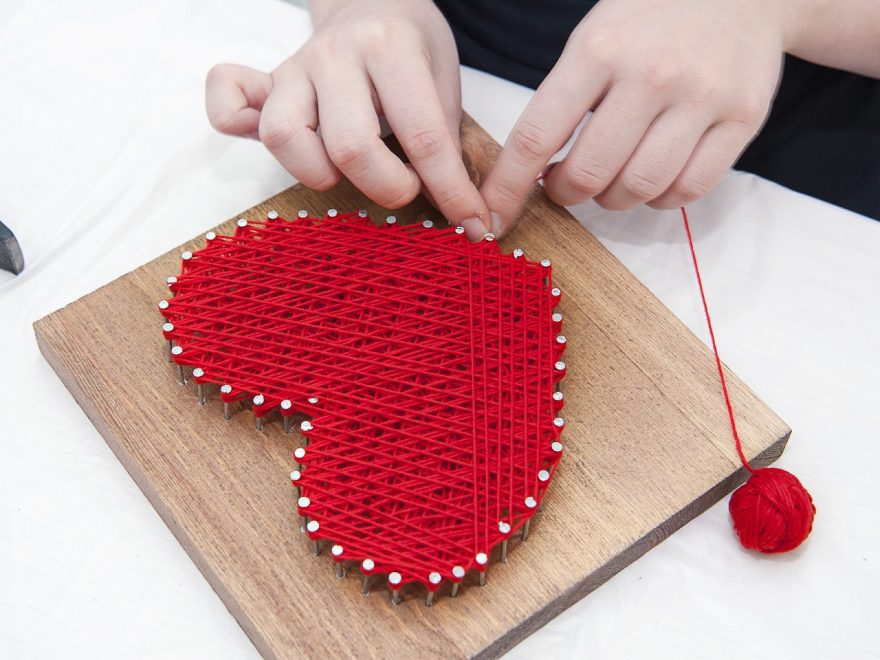 String-art is considered a relatively new type of needlework, but many mistresses have already fallen in love with it. Let’s consider the main points related to the technique, the use of materials and ways of decorating works.

The main components of the technique of string-art are threads and nails. Translated from the English language, it is a story of thread and string. Essentially, it is the making of crafts by wrapping threads around nails, arranged along the outline of the drawing.

The first rudiments of such drawings, crafts, products are found as early as the seventeenth century. But for a long time such craftsmanship has been forgotten, and its revival has received only in the XX century.

According to one version, we owe this event to mathematics teacher Mary Everest Bull. It was she who took an original approach to the question of constructing basic figures in geometry. She brought to class a piece of board with nails already nailed on, and with a rope she drew the outlines of geometric figures.

The American John Eichenger (a designer of one of the companies) presented to the world “drawing” such pictures with thread as handmade works. Seeing something interesting in it, he began to make paintings to order. Mostly he created mandalas in this technique. A little later, the designer had not only followers, but also competitors.

In modern needlework art can be divided into several trends:

Such amazing works decorate the walls of houses, store shelves and themed offices. Handicrafts made of thread and nails are given to acquaintances, colleagues, relatives, friends.

What is needed for creativity?

In this needlework there is nothing superfluous, and there are also no difficulties. For the work you need the following materials:

Here is a description of the main stages of making beautiful panels and paintings in the technique of string art.

Next, let’s prepare the surface: it is necessary to sand it, to apply the chosen coating.

The decision to apply the pattern is made. With the help of a template or stencil, you can sketch the main strokes on the boarded surface. If you have chosen a too complex ornament, you can print it on paper and fix it with scotch tape on the base, and after completing all the stages of the work just remove all the remnants.

Then it is recommended to hammer nails along the contour. This should be done carefully, at a certain distance.

The optimal distance between nails is one centimeter. Remember that the more voluminous the picture is planned, the higher the nails should stick out over the area of the board.

After you can pull the threads between the flats, following the sequence of the applied pattern. The principle is this: first, the end of the thread is tied to any nail (after all, you can start working from anywhere), to change the shade or fix the pattern, we change the thread, fixing it to the nail, and at the end of the working process, all the remnants are cut off.

Then the pattern is completed with edging, and the shades can perfectly harmonize with each other or match in tone. Finishing is done along the contour of the entire pattern, outlining the outline, accurately emphasizing the appearance of the picture.

If corners and circles are filled in correctly, the technique is learned quickly. For edging a corner we take a ruler, draw a corner of any degree. The figure is divided into equal intervals with the creation of a pair of holes. Pull the thread and fill the corner so that the opposite points are connected.

The arc is widely used in the manufacture of floral ornaments. First we draw a circle of any diameter, then connect the holes so that between them there was less blank spaces.

To get the circles we will prepare an awl with a compasses in advance. We draw a circle of desired diameter, the points are placed as the divisions on the dial. Then we thread the threads to get a star of a large number of rays.

Let us list some recommendations, which should be followed during the work.

Among the main directions are the following.

Children’s themes are also very popular, and often children themselves participate in the creation of such a mini-masterpiece. The most relevant schemes of hearts, dolphins, cats, dogs, fish, toys.

How to make their own hands?

Of course, beginners should not take up complex schemes at once – only simple techniques and a minimum of colors will allow you to learn the technique to the full. When choosing a particular thread pattern at the initial stage, use special simple templates or the simplest pictures for children. It is better with them to bring to perfection the basic movements.

Ideas for creating a panel in a particular style are a huge number: from animalistic plot to “drawing” a map of the world and weaving mandalas. The following is a step-by-step description of how to make some of the simplest pictures.

So, here are our master classes.

In the initial stage, it is recommended to cut out or print out the snowflake you like on paper. After transfer the pattern or fix it with scotch tape on the surface.

Then drive nails along the contour, and then pull white threads between them. Usually for the manufacture of such work are taken versions of this color, but depending on the purpose, you can use blue, blue, gray shades of fittings. The snowy pattern is ready.

In this technique you can create any floral composition, but we will do tulips. This is quite a popular theme of such works.

To begin with, let’s prepare nails in an amount of approximately 100 pieces, spools of red, light green threads, a board of the right size, a simple soft pencil for tracing the outline.

On a sheet of paper it is necessary to draw three ovals of approximately equal size – these are the buds of future tulips. In the same sequence, draw leaf plates, stems, mark with points the place where the nails will be driven in.

Fix the paper to a board, hammer nails, and after the work is done, remove the rest of the paper. We embroider the ovals of the tulips with red thread, and for the stems and leaves we use a shade of green.

Masters in this case will understand that it is better to take a real maple leaf for this work. We outline it by contour or fix it on a ready-made board, hammer in the necessary amount of nails. At the last stage we wrap the nails with thread. For the production of the panel can take any shades of green, brown, pastel colors. For example, the outline is decorated with a dark brown, and in the central part you can use a lighter shade. During the work necessarily work through all the threads veins. When you reach a certain level of skill or perseverance, you can “draw” a whole bunch of maple leaves.

There are two ways to make trees in this technique: sketchy or believable. It is possible to work through the whole forest, as well as to make only a single branch. The panel is decorated with the use of several colors or in black and white. Breed of exotic tree, additional details are only welcome. A thick crown is performed with thin threads with the filling of the entire background, additional elements are also drawn: cherries, acorns, apples, leaves.

Perhaps the easiest element is the heart. Such a panel is appropriate to give to a loved one for Valentine’s Day. And the image on the picture will look good in any room of the house: living room, kitchen, nursery, bedroom. You do not have to use scarlet thread in this case – interlacing of several shades of this group will look advantageous: red, pink, orange or pink and purple, lilac, red and orange – in other words, fantasy has no limits.

On the paper base we put the heart with the main dots pre-painted. Spread the paper with a drawing on the board, place the nails along the outlined contour.

Then we form a knot in the bottom of the heart, and begin to wrap the threads at an acute angle.

In order to apply certain letters or inscriptions, you must first prepare stencils of certain characters. In the uppercase or printed version, they are drawn at a predetermined distance, so that the words are easy to make out and read.

There are many variants of execution – here is one of them.

Let’s prepare a furniture board or a board of relatively large format. Then neatly hammer in nails at a distance of one centimeter, using an angle or ruler, compass (depending on the chosen format of the characters).

We outline the letter signs, and then draw a certain background using several shades of color. The space in the letters will look interesting filled in any order.

The finished inscription is decorated with additional details or pictorial means of choice.

Animalistic theme in needlework is a special section. String-art is not avoided. Masters with success prepare panels with the image of an owl, deer, bear, wolf or lion.

At the initial stage with a pencil we sketch the main silhouette with the marking of points for stuffing nails. After that we put a ready scheme on the board surface and work according to a given algorithm.

Let us suggest some interesting ideas:

Abstraction is always in fashion, but requires a competent selection of thread colors.

Making pictures in the newfangled style can do not only children but also adults, and even older people. The technique develops fine motor skills, patience and perseverance, helps to improve color perception, eye movement, imagination, spatial and abstract thinking styles.

Now sold in specialized stores, a large number of ready-made kits. Undoubtedly, they are easier to make. For a beginner, even this option will seem convenient. The kit contains everything you need: a ready-made treated surface, threads by color, a drawing and instructions.

With the help of paintings and panels in the technique of string art it is easy to make positive changes in the interior of the room. Remember that the human imagination is limitless, and, besides threads with nails, you can use anything in the manufacture of such crafts.