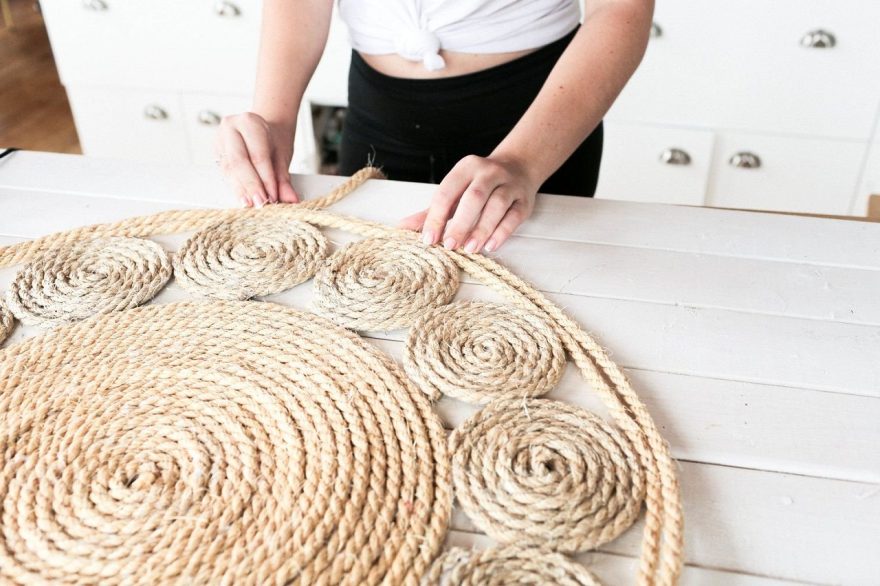 While admiring the beautiful woven mats on the Internet, the simplest diagrams and videos, I decided to weave my own rug for my cats on the windowsill for warmth and beauty.

How to weave a rug, I seemed to understand and thought that such a tiny rug from scraps and leftovers will weave their own hands quickly and cheerfully.

All, all the pitfalls that I met myself on this path, I will show you, to give you the opportunity to learn from others’ mistakes.  Although, I know from experience that our mistakes will find us anyway.

Stages of the big way to a small woven mat.

I picked up the color of the stuff: an old bathrobe with beautiful crimson piping, sock, thread, and separately bought a meter of ribbon with pompons. Later I added an old brown wool sweater.

From the lid of a large shoe box cut a circle. By the way, you can make a lot of interesting things from shoe boxes.

The circle I drew with a large plate.

Making a loom on cardboard

The cardboard circle will be crossed out into segments through the center. You will not believe it, but even the smallest details affect the quality of the piece as a whole. The number of segments determines the density of the weave, but, in any case, the density in the middle will be immeasurably greater than at the edges. We make incisions and wind a fairly strong thread or tourniquet on a circle through the cuts and through the center along the lines. This is the basis of the weave. I have a yarn composition of wool and cotton, strong, hands do not tear.

Thread winding is NOT TIGHT, through them will need to pass balls of yarn or skeins of braid. Better if the winding is on a circle, and the thread is already moving in the cut.

Bind the thread in the center on the back side of the circle.

Make an odd number of threads.

No matter how many cuts you make, 20 or 60, you need to reduce the number by one, that is, make an odd number. Simply move one thread from one notch to the other.

Passed a circle, pull the red, in my case, thread and get the center of the rug.

After this preparatory procedure, you can begin the pleasant creative process, the selection of color, texture. Hands are mastered with threading the yarn through the base and the prospects seem rosy.

So I finished the work with wool pigtails. The last pigtail just sew it on.

Turn the work over and trim the warp threads as shown in the photo. Fear not, everything is fixable! Especially if the article was read to the end before working.

And just remove the bunch of thread from the middle of the circle on the back side of the work. Then remove the cardboard.

Tie off the neighboring warp yarns and neatly trim them as shown in the photo.

Decorate the rug with tassels.